In the early stages of COVID-19 many banks were focused on a short to medium term downturn, triaging only the most affected / impacted sectors.  Then the PPP program came and went, effectively buying time for many businesses and allowing the clock to be “reset”.

As little progress has been made containing COVID-19, the realization is starting to set in that we are yet to see the worst of the economic damage.  Many banks are now bracing for a much more protracted downturn, in which most, if not all sectors will see significant credit deterioration.

Following news that the four largest US banks have effectively doubled loan loss reserves – regional banks are starting to follow suit.  In addition to increased provisioning, many are just beginning to determine a broader balance sheet strategy.  Continuing on the “wave” reference, the “crest” has not yet appeared.

Many banks are still trying to support their customers as best they can – and the likely second wave of financial stimulus will supplement this effort and reset the clock again.  Despite the warning signs, it is simply too early in the COVID-19 cycle for the determination to be made which customers will have to be cut or scaled back.

That said, this difficult decision process will come sooner than expected.  Banks will need to be prepared with a pre-conceived strategy to effectively navigate this crisis.  For many, this will be shrinking balance sheets while for others this will be adopting new strategies and technologies that were never needed before.  When this wave does crash, one thing will be for sure – the “winners” will be those who acted early to best position themselves ahead of their competitors.

The crisis we are experiencing presents a major dilemma for banks. Many of their borrowers are facing difficulties in paying their loans on time. These borrowers are asking banks for forbearance on current due payments. Given the government 90 days forbearance programs, banks routinely grant such requests. Absent the government programs, such forbearance will lead to reclassification of a loan as a Non-Performing-Loan (NPL), thereby requiring an increase in the reserve set aside for potential losses. Indeed, the trend in the upcoming NPLs is clearly shown through the data coming out of the CMBS market. Moreover, even during the government programs, JPMorgan’s most recent financial reports show a massive increase in reserves.

Without government forbearance programs, banks need to decide what to do today.

If banks believes, as many do, that even with government help we are heading into a recession that can last at least a year, banks will need to act now. In the coming months, there will be a surge in the number of NPLs. Many banks will want to sell them. And with high supply the discount on these loans will increase.

Indeed, an important lesson from the 2008 crisis, the longer a bank waited the deeper was the discount on the loans sold.

Currently, there are more buyers looking for NPLs than sellers. To take advantage of this higher demand banks need to sell now some of their potential NPLs. Depending on the type of business—such as hospitality, retail, or multifamily—and the strength of the client’s balance sheet, it is possible to estimate the likelihood of a recovery or the soundness of a foreclosure. Selling now the loans with the higher likelihood to fail, will hedge the risk of the banks against the deeper discount expected in the future.

However, although selling the NPLs in the near future is inevitable, banks prefer to postpone this action because of potential reputation effects vis-s-vis clients, peers, and investors. Waiting and selling loans, even at deep discounts, together with many other banks does not carry the same reputation risk.

But banks need to be creative. Instead of accepting deep discounts to avoid the reputation risk, they can conduct a confidential competitive sale process. The selling bank can run an anonymous auction among the potential buyers, and reveal its identity subject to signing NDA only to the winning buyer. This process can be done even for banks who wish to sell only part of an NPL, due to a commitment to the borrower not to sell the whole loan.

The year 2020 started off strong followed by a roller coaster of economic events in Q1 and Q2.  A pandemic left offices, hotels, malls and streets vacant as America stayed home. Unemployment reached unprecedented highs. The economy slowed but didn’t stop with the aid of government stimulus. The stock market experienced volatility, though generally showed buoyancy. Overall, companies have experienced unforeseen stress to their bottom line putting pressure on credit metrics and affecting the lending market.

Lenders, both banks and non-banks, generally put a halt on writing loans to reevaluate their strategy and shift into loan surveillance.  Some borrowers were granted forbearance or other temporary modifications to their loans, typically for a period of three months. Now July, many borrowers are reaching the end of that period. More defaults are expected for borrowers that are still experiencing stress. Similarly, some loans that may have been in a payment grace period are starting to fall out of grace as they haven’t been able to cure their loans. Many of these distressed loans will be sold by the end of 2020 with some NPL’s coming to market now.

Tracking CRE mortgage distress, public data from CMBS gives us a window into loan defaults. The graph below shows the upward trajectory of June delinquency data reported by Trepp. 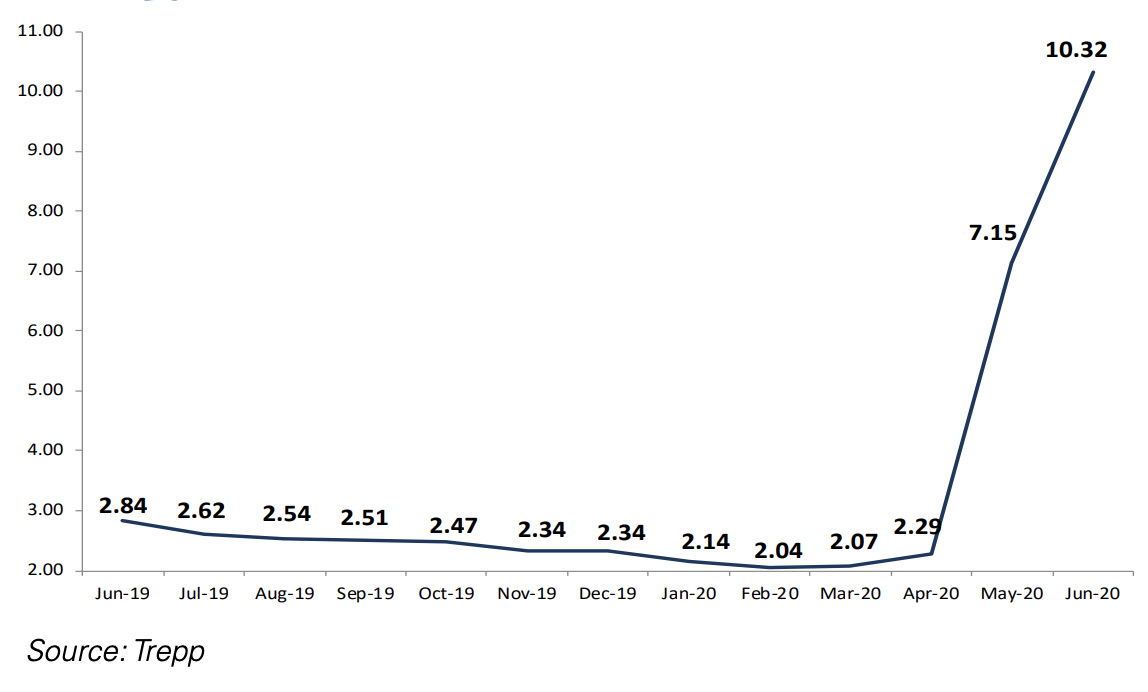 Breaking down the June 2020 delinquency rate, the table below details the rate by property type.  Hotel and retail loans have shown the greatest distress so far with expectations of increased delinquency for office loans.

Hotels have the highest delinquency rate due to the lockdown on travel.  Having the shortest lease term being priced daily, hotels revenue effects are immediate.  STR expects occupancy to return to the long term average by 2023 with hotels discounting price for market share.  STR’s 2020 hotel demand projections are -35.6%.  Continued defaults in hotel mortgages are expected as hotels struggle to survive.

The retail sector has been hard hit due to forced store closures and changes in retail behavior.  Sales have increased for online retail, supermarkets, and drugstores during the shut down.  However, that isn’t the norm for retail tenants.  According to Datex Property Solutions, 68% of national chain retailers paid their June rent.  More retail distress is expected with continued announcements of bankruptcies which will negatively impact mortgages on retail properties.

Multifamily has been affected as well due to job losses and consumer financial strain.  According to the National Housing Council, 77% of households made a partial or full rent payment.  Delinquencies remain relatively low by comparison.

The future of the office sector is in question with the effectiveness of work from home and the concerns of social distancing while at work.  Some argue that companies will remain remote, while others argue the loss of culture and productivity require companies work out of the office.  Similarly, tenant footprints are argued to decrease with fewer people in the office or increase giving more space per employee.  There is stress on the sector, and despite the longer lease terms some borrowers will face tenant vacancies, renegotiated lease terms and increased expenses due to the pandemic.  More distress is expected to be seen in office loans and defaults.

The industrial sector has been less affected by the pandemic and is expected to remain stable.  The changes in the retail dynamic and online sectors have helped lessoned the stress of industrial tenants.  A stable level of default is expected for industrial loans.

All in all, with approximately $400 billion of defaulted CRE loan outstanding and continued stress in the commercial mortgage sector, the coming months expect to bring increased loan defaults and increased opportunities for distressed debt buyers.  Lending and capital markets are showing signs of opening.  Workout specialists are busy and NPL’s are coming to market.

After relocating to the U.S in 2014, we decided to build a platform that will change the way banks and financial institutions are selling and buying debt.

The Problem
We researched debt market access among banks and financial institutions in the United States and around the world. Our research showed the main problem in the market is access to deal flow, since the financial industry is relying heavily on relationships.

The Solution
After raising seed money from angel investors and from D.E.Shaw in early 2018, we started building the Metechi marketplace. We are passionate about creating new relationships between vetted participants to enable greater deal-flow for banks and financial institutions.

We believe that true value lies in the robust relationships we establish with others. That’s why we are facilitating connection-building for new business opportunities.

Metechi is fully inclusive: we bring CRE debt buyers and sellers together to enable you to build relationships with other lenders. To date, Hundreds of lenders selling and buying CRE, C&I, and distressed debt have already signed up to Metechi, and are enjoying the platform.